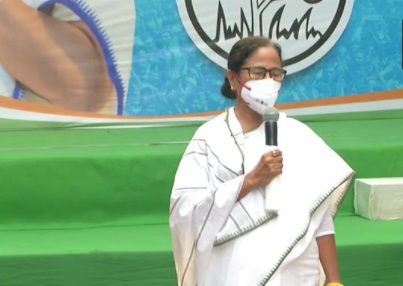 Kolkata:- Mamata Banerjee appeals for peace in the state after violence erupts and also urged to maintain COVID-19 protocols. “I appeal to everyone to maintain peace and not indulge in any violence. We know BJP and central forces have tortured us a lot but we have to maintain peace. At present, we have to fight Covid-19,” said Mamata Banerjee. TMC supremo will also hold a meeting with party leaders at TMC headquarters in Kolkata later today and will meet West Bengal governor Jagdeep Dhankhar at 7 pm to stake a claim to form a government.  The party, which had 209 members in the outgoing Assembly, looks set to improve its 2016 tally. The state has a 294-member Assembly but the election was countermanded in Shamsherganj and Jangipur constituencies due to the death of candidates. A party needed 147 seats for a simple majority in the House with an effective strength of 292.