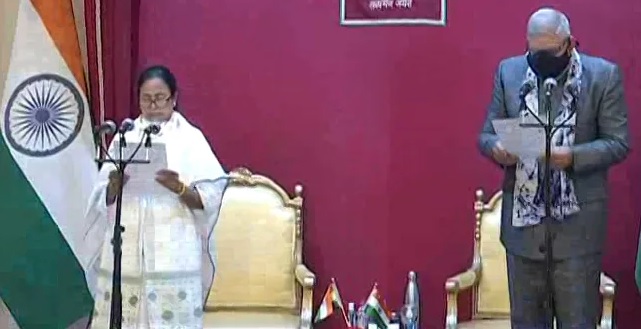 Kolkata: After the third victory in West Bengal Mamata Banerjee was sworn in today as Bengal Chief Minister for the third time in the shadow of Covid and post-poll violence in parts of the state. Mamata Banerjee, in her trademark white Sari and shawl, took oath in Bengali. The rest of the cabinet and the council of ministers will be sworn in on May 9, the birth anniversary of Rabindranath Tagore. The oath ceremony took place with Covid protocols in place at the “Throne Room” at the Raj Bhavan. She is expected to start her new term with a meeting with top officials on the Covid situation and law and order in the state. Among others, TMC and Banerjee’s nephew Abhishek Banerjee, TMC’s poll-strategist Prashant Kishor, and party leader Firhad Hakim were also invited to the ceremony. Chief ministers of other states and leaders of other political parties had not been invited to the programme keeping in mind the current COVID-19 situation in the country.

Since the election verdict on Sunday, there have been clashes involving both the Trinamool Congress and the BJP. Both parties have traded blame for the violence. Hope CM Mamata Banerjee will take urgent steps to restore rule of law, says Bengal Governor Jagdeep Dhankhar after Mamata takes an oath.