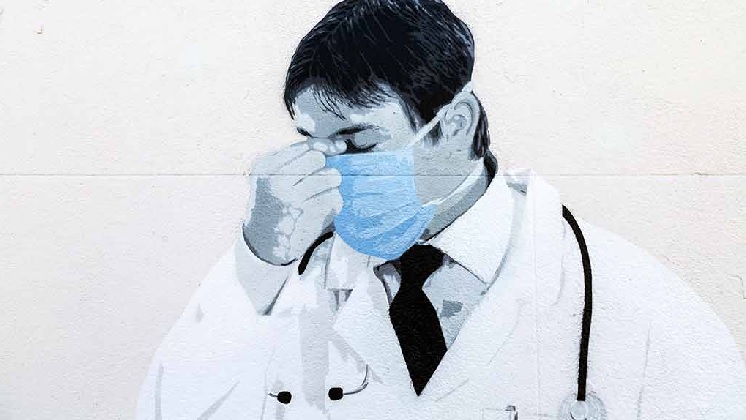 1076 as on 19.05.2021. That is the number of Indian doctors who have sacrificed their lives so far in the fight against Covid. That is not just a statistic, these are actual human lives lost and families torn apart.
As a soldier who loses his life fighting comes home a martyr, one would expect the same for these medical heroes. On the contrary, the supreme sacrifices made by our doctors are not even counted, let alone acknowledged.
Doctors who lose their lives fighting on the frontline of this pandemic have not even been given the courtesy of being a statistic. It is a personal effort on behalf of the Indian Medical Association that has counted these martyrs.

The worst-hit are the General Practitioners, our first line of defence, all across the country, family doctors take the first call of pandemic struck patients; paying the price for their neighbourhood accessibility.
The first week of infection, dubbed “The Golden Week”, is invaluable for rapid diagnosis. It is also the period where the virus is at its most infectious. Due to the continual exposure to patients adamantly in denial of their symptoms, the fatality rate amongst doctors is higher, probably due to the high viral load they carry.
Several doctors- young and old, have lost their battles against Covid.

Long working hours without breaks, continuous exposure to the virus, the risk of carrying the infection home to their families, lack of adequate PPEs and facilities, irregular pay scales, inability to pay for their own medical treatments, and above all, the emotional turmoil of facing and fighting death every day- are just some of the heart-breaking difficulties faced by them.
Despite that, they fight for their patients till their last breath, leaving behind their families in a lurch.
The gross under-reporting of the deaths in the doctor community is a matter of great national grief and shame.

The minimal compensation offered to government doctors gets buried in cumbersome insurance formalities, whereas private doctors receive none.
Now more than ever, doctors and hospitals have faced violence, stigma, and reproach, and have even been denied dignity in death.Doctors today fight death every day for their patients, which takes a physical and mental toll on their health. Despite the limitations posed by the underfunded healthcare system, our doctors have served the nation above and beyond their call of duty.

As a nation, we need to improve upon the shabby treatment meted out to our doctors.
As a soldier goes to war willingly for his nation A doctor does so for his patients.
The soldier comes home draped in the tricolour, a “Martyrs”

Both fights for their nation

And yet are awarded two starkly different stations?

I strongly believe that any doctor who has succumbed to the pandemic in the line of duty deserves the status of a national martyr. Their families should be eligible for state assistance and be well looked after.