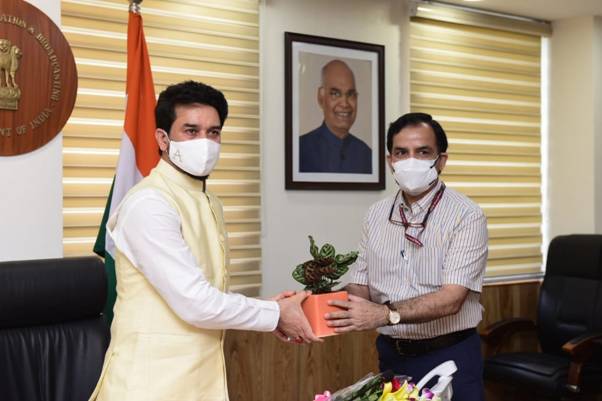 Anurag Thakur, has today assumed his charge as Minister of Information and Broadcasting. Speaking with the media on the occasion, the Minister said Prime Minister Narendra Modi has made strenuous efforts to take the nation forward in the last seven years and that as Minister of I&B it will be his responsibility to take that mission forward. Shri Thakur said that he will make all efforts to deliver on the responsibilities placed on him by the Prime Minister and he looked forward to the cooperation of media going forward.

The Minister was welcomed in his chamber by Amit Khare, Secretary, Ministry of I&B. In an interaction with senior officials of various media units and PrasarBharati, Shri Thakur said that his endeavor will be to work with all the media heads as a team. After Yogi Adityanath’s Delhi trip, buzz of his berth on parliamentary board