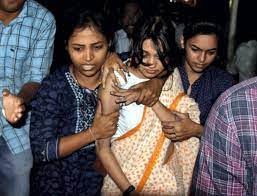 The meeting took place after the NCW had sent a notice to the Director General of Police (DGP) Maharashtra, asking him to appear before the Commission for hearing in connection with the case wherein Marathi actress Ketaki Chitale was arrested by the police for allegedly sharing a post against NCP chief Sharad Pawar on social media. During the hearing, NCW put forth pertinent questions on Ketaki’s arrest and issued further directions to the police for immediate compliance. According to the police sources, the Commission had discussed the grounds on which the police had taken action against Chitale and what action had the police had taken against people who had physically assaulted Chitale. Milind Bharambe, Spl IG (L&O) appeared on behalf of DGP Maharashtra. A local court on Thursday granted bail to Ketaki Chitale in an Atrocities Act case, which was registered at the Rabale police station. However, even after the legal relief, the actress would continue to remain in judicial custody in the Sharad Pawar post case filed by the Kalwa police. The hearing in the politically-sensitive case is on June 21.