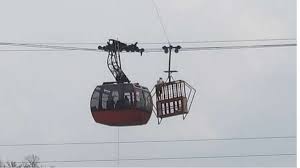 A cable car was deployed to rescue the stranded tourists, while the technical team of the Timber Trail operator was also on the spot. A police team was monitoring the situation. Eleven people, including two senior citizens and four women, are stuck in a cable car trolley for the last 1.5 hours following a technical fault in the cable car system. Rescue operation is underway. A video message of the tourists earlier showed people stranded inside the cable car suspended mid-air while the people appealed for help. In the video, the people claimed that they have been stuck in the cable car for over an hour, yet they have not been rescued. Himachal Pradesh Chief Minister Jairam Thakur took to Twitter to assure that all the stranded tourists will be rescued safely. “Rescue operation of tourists trapped in Parwanoo Timber Trail of Solan is going on. As soon as I got the information about the incident, I left for the spot. The administration is on the spot and with the help of NDRF and administration, all the passengers will be safely rescued soon,” the CM said in a tweet in Hindi. The ropeway ride is a popular tourist attraction of the Timber Trail private resort, which is around 35 km from Chandigarh. The resort mainly attracts tourists from across the region as Parwanoo is located at the cusp of Himachal with Haryana, Punjab and Chandigarh surrounding it.