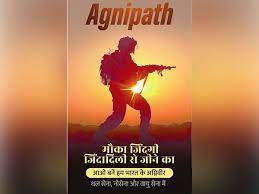 The newly rolled out Agnipath scheme has evoked a sharp response from the army aspirants. The online registration of the scheme started on June 24.

Singh was critical of the scheme saying it was unfair to the aspirants. “50,000 youth had passed in running and medical tests. They have been cheated. Their entire recruitment process has been cancelled. Now, they have to participate in the recruitment process afresh. Earlier, the states had a special quota. Now, that quota will not be there, so no one knows who will make it.”

The Congress party said that reforms in the armed forces have to be transparent and not “imposed surreptitiously” at a cost of opportunities for the youth. Singh represented the Barmer-Jaisalmer constituency of Rajasthan in the 14th Lok Sabha, where he was a member of the Standing Committee on Defence.

Speaking about the damage the Agnipath will cause to the Army and its preparedness for war he said, “There will be two kinds of soldiers recruited in a unit in the Agnipath scheme – the current recruits that enjoy all benefits, including leaves, medical and education, and the new prospective ‘Agniveers’ who will be deprived of all such benefits including relatively low salary packages,” the Congress leader said.