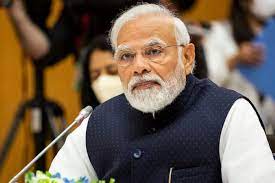 Prime Minister Narendra Modi on Saturday said he will discuss issues such as energy, climate, food security, health and counter-terrorism with world leaders at the G7 Summit this weekend.

In a statement issued ahead of his departure for a trip to Germany and the United Arab Emirates (UAE), Modi said he will visit Schloss Elmau at the invitation of German Chancellor Olaf Scholz for the G7 Summit. “In an effort to strengthen international collaboration on important global issues impacting humanity, Germany has also invited other democracies such as Argentina, Indonesia, Senegal and South Africa to the G7 Summit,” he said.

“During the sessions of the summit, I will be exchanging views with the G7 countries, G7 partner countries and guest international organisations on topical issues such as environment, energy, climate, food security, health, counter-terrorism, gender equality and democracy.

Modi will participate in two sessions at the G7 Summit devoted to climate, energy and health, and food security and gender equality. He will also hold bilateral meetings on the margins of the summit with leaders of G7 states and the guest countries. He said it will be a pleasure to meet Scholz again after their participation in the India-Germany inter-governmental consultations last month.

“I look forward to meeting leaders of some of the participating G7 and guest countries on the sidelines of the summit. While in Germany, Modi will also meet members of the Indian diaspora from across Europe. He said they are “contributing immensely to their local economies as also enriching our relations with European countries”.