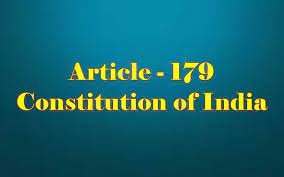 Rebel Shiv Sena leader Eknath Shinde stressed before the Supreme Court yesterday that the Deputy Speaker of Maharashtra Assembly cannot conduct any disqualification proceedings until the motion seeking his removal is pending. Senior advocate Neeraj Kishan Kaul had argued that, “Speaker has no authority to deal with disqualification till his own removal is decided. Secondly, an argument is made that assembly is not in session. That is irrelevant. Either the Cabinet can convene the Assembly or the notice can be tabled when the Assembly is convened.”

India today looks at what Article 179 of the Constitution says:

Article 179 of the Constitution speaks about removal of the Speaker or Deputy Speaker. Clause (c) of Article 179 states that a Speaker or Deputy Speaker may be removed from his office by a resolution of the Assembly passed by a majority of all the then members of the Assembly. It is clearly stated in the provision that – provided that no resolution for the purpose of clause (c) shall be moved unless at least fourteen days’ notice has been given of the intention to move the resolution.

Supreme court advocate on record, Ashwani Dubey explained Article 179. He said, “The Speaker or the Deputy can at any time resign from his position, but the resignation should be in writing in his hand addressed to the adjacent person in the office of the Speaker of the concerned State.”

Elaborating further on this, Supreme Court advocate Ashish Dixit said, “Constitutionally, Speaker or Deputy Speaker can be removed from office if the legislative assembly passes the resolution by a majority of the then members of Legislative Assembly. Before resolution can be moved it is mandatory to give 14 days notice manifesting intention to move such resolution. During the period when resolution is under consideration the Speaker or Deputy Speaker cannot preside. In this period such other person as rules of Assembly provide or person determined by the Assembly shall act as the Speaker.”

The notice had also cited observations of the Supreme Court in the case of Nabam Rebia Vs Dy. Speaker, Arunachal Pradesh Legislative Assembly and stated that Speaker/Deputy Speaker of an Assembly cannot decide on the disqualification of MLAs while a motion for his or her removal is pending.