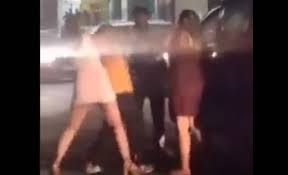 Two of the women seemed extremely violent and used choicest of words, kicked and punched each other and also pulled each other by hair. Others in the meantime were seen trying to control them. The girls had visited the bar for partying and reportedly argued over one of the boyfriends. Other girls present on the spot also got entangled in the fistfight while trying to control the situation.

On receipt on information, Misrod police took them to police station late night and allowed them to go when they apologized and struck a compromise. The police said that there were a total of five girls mostly hailing to upper class families and were accompanied by a few boys. There are several bars in the area and girls taking drinks and fighting on the road is quite common in the area, said an officer from Misrod police station.