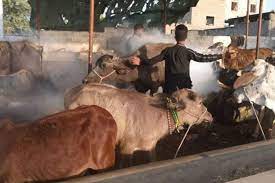 Livestock in Pakistan have a problem with LSD. No, not the psychedelic drug but the viral skin disease characterized by raised nodules on the skin. Hence the name, lumpy skin disease or LSD. The country has been trying to curtail the spread of this contagious disease for several months now, but the situation has only become worse and is now all the more urgent ahead of Eid Ul Asha scheduled around 4-5 July. As per media reports, the disease first emerged in Sindh province, The livestock department in Punjab said there was no money to buy vaccines for cattle. Many small farmers are buying the vaccine from their own pockets, with a 100 ml bottle costing as much as Rs 44,000. The vaccination takes 28 days to show effect, during which the cattle’s health remains uncertain. The disease outbreak is not only threatening to ruin Eid celebrations, but it is also likely to severely impact Pakistan’s livestock industry, which contributes 11 per cent to the country’s GDP. Pakistan’s economy is already suffering a financial crisis. Almost eight million families in Pakistan work in the livestock industry.  The disease, health experts in Pakistan have said, doesn’t transmit to humans by consuming milk from an infected animal. This bacterial infection can cause cattle to produce less milk. The disease also hampers their reproductive system.