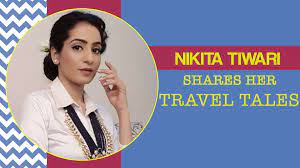 We Hindus do not kill in the name of Lord Shiva. Such a thing was never heard that Hindu has killed someone for Shiva.

Whatever blasphemous comment Nupur Sharma had made, after that she was suspended, what about those who made objectionable comments against Shivji, Niharika commented in a video.

Several objectionable comments were made against Shivalinga, it also made us angry. People are giving threats to Prime Minister Modi, this is not correct, the model said.

After the model posted the video on June 30, she is continuously receiving death threats including slitting of her throat on her social media accounts by some unidentified Instagram and other social media users.

Some even threatened her that her countdown started and soon her number would come. While speaking to the media, she mentioned she is also getting anonymous threatening calls, but she is not afraid. The model is presently in Indonesia and busy shooting for a film. On the issue of death threats, IG Bastar (range) Sundarraj P said, “I am unaware about such incidents but if protection is asked we will think about it.”