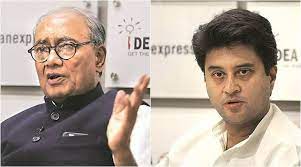 Comparing newly-appointed Maharashtra chief minister Eknath Shinde and Union minister Jyotiraditya Scindia, Congress veteran Digvijaya Singh on Monday said that while Shinde became CM with the BJP’s help, Scindia did not, despite joining the BJP. BJP does great injustice. After Eknath Shinde revolted he was made chief minister and Devendra Fadnavis deputy chief minister. In Madhya Pradesh, too, they could’ve made Scindia the CM and Shivraj Singh Chouhan, his deputy. This is sheer hypocrisy,” Singh posted on Twitter, tweeting in Hindi.

The former Madhya Pradesh CM was reacting to a video in which Scindia, who left the Congress in March 2020 to join the BJP, tells media persons, on being questioned if he would be given the state’s top job, says repeatedly he is just a ‘sevak’ (servant) and has never dreamt of any post.

In December 2018, after the Congress won the assembly elections in the central state, pushing the BJP out of power, senior politician Kamal Nath was made the chief minister, instead of the Scindia family scion. However, around 15 months later, the now-former Congress leader switched to the BJP, and was followed by MLAs loyal to him, triggering the collapse of the Kamal Nath government.

Shiv Sena leader Eknath Shinde, on June 20, began a rebellion against Sena supremo and Maharashtra’s then CM, Uddhav Thackeray. The chain of events culminated with Thackeray resigning from the top post on June 29; a day later, Shinde took over as CM, with former chief minister and BJP leader Devendra Fadnavis, widely expected to succeeded Thackeray, taking oath as deputy CM.