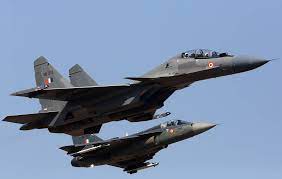 The framework of the “Make in India programme’’, is ready to supply additional completely knocked down kits for the assembly of the Su-30MKI. The Russian export agency is also ready to carry out joint work on the modernization, including the integration of the latest air weapons, avionics, etc., on the Su-30 MKI.

The Su-30 MKI which is the backbone of the Indian Air Force is being manufactured in India under license at state owned Hindustan Aeronautics Limited (HAL). And under the existing portfolio of aviation projects, the Russian company is also involved in developing technological cooperation in a broad range of areas. The 2022 year marks the 45th anniversary of the maiden flight of the Su-27 fighter prototype which has been developed by the Sukhoi Experimental Design Bureau and that’s how the family of Su-27/Su-30 fighter jets emerged.

According to an official note from Rosoboronexport, in the21st century, this fighter jet has become one of the most in-demand fighters in the world. Its global customers include: India, Indonesia, Kazakhstan, China, Angola, Belarus, Venezuela, Vietnam, Uganda, Malaysia and others.

According to Vladimir Artyakov, First Deputy Director General of Rostec State Corporation, “Air superiority is a key factor in any confrontation and that is the reason why we pay great attention to developing new advanced platforms.” The Su-27 at one time had become a technologically breakthrough machine and the progenitor of a whole family of outstanding aircraft.