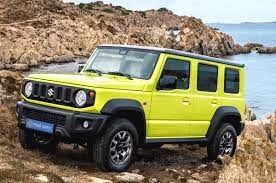 Suzuki continues testing the five-door Jimny SUV ahead of its official unveiling which could take place in late 2022 or early 2023. New spy images shared on the web give us a fresh look at a test mule of the upcoming model.

As seen in the spy shots, the new five-door Suzuki Jimny is completely wrapped in camouflage, thus hiding most of the design.  The unit in question rides on a set of new black alloy wheels, while the rest of the overall design remains essentially unchanged over the current model on sale in global markets.

Under the hood, the upcoming five-door Suzuki Jimny could be powered by the same 1.5-litre NA petrol engine, although reports suggest a 1.5-litre turbo-petrol mill with a mild-hybrid variant could also be in the works. Meanwhile, Maruti will likely introduce the three-door Jimny for the Indian market at the 2023 Auto Expo.