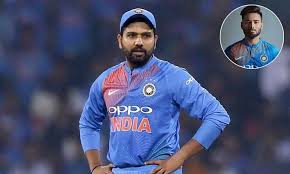 India captain Rohit Sharma was caught cussing at his teammates during the second T20I against England at the Edgbaston, Birmingham on Saturday. Between overs four and five, Rohit was caught on the stump mic asking players to listen to him and during the conversation he cussed Indian players in Hindi. As soon as the video of Rohit cussing Indian players was posted on Twitter, Indian cricket fans asked him to calm down.

Meanwhile, Sharma scored 31 runs in just 20 balls with the help of three fours and two sixes. With this innings, Rohit helped his side post a challenging total of 170/8 in 20 overs. Along with it, Rohit also became the first Indian and only second batter to hit 300-plus boundaries in international T20.

Number one on the list is Ireland’s Paul Stirling, who has 325 boundaries to his name while former India captain Virat Kohli is third on the list. Both the India batsmen were on 298 fours before the start of the second T20I. As Virat failed to score big, Rohit won the race to achieve this big feat.