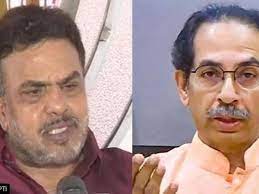 The upcoming Presidential elections starts, the Shiv Sena on Tuesday dropped broad hints that it may support NDA’s candidate Draupadi Murmu and not the non-BJP Opposition’s nominee, Yashwant Sinha. Congress leader from Maharashtra, Sanjay Nirupam today said, “If Shiv Sena supports Draupadi Murmu, will it be a historic decision of the party and it will be the end of the internal democracy in Shiv Sena.”

Earlier Balasaheb used to give orders and the MPs used to follow them. This time it will happen that the MPs ordered and a party has obeyed. His comment comes hours after Shiv Sena MP and Chief Spokesperson Sanjay Raut said that party President Uddhav Thackeray will announce his decision in a day or so in the matter.

In the past even Balasaheb Thackeray used to hold such consultations with party leaders on major issues and the decisions were made on the basis of the view of the colleagues. At yesterday’s meeting, the candidature of Murmu was also discussed,” said Raut.

The Sena said Monday (July 11), Thackeray had discussed the Presidential polls issue and other matters in detail at a meeting of most Sena MPs from Lok Sabha and Rajya Sabha besides some other top leaders.

He also rubbished speculation in a section of the media that the Sena is on the verge of a split with even MPs preparing to revolt and join the group led by Chief Minister Eknath Shinde.