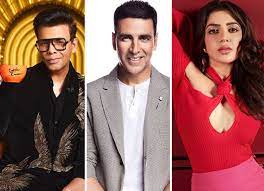 Karan Johar has made while promoting this season of Koffee With Karan, it appears that this will be its most successful season yet. He has claimed a number of things, from admitting Sara Ali Khan and Kartik Aryan dated one another to leaking questions to the Student Of The Year cast. And now Karan Johar talks about Samantha Ruth Prabhu’s debut episode alongside Akshay Kumar. He guaranteed that everyone would have a good time and go absolutely crazy. In a conversation with Bollywood Hungama, Karan Johar was asked to differentiate two superstars namely Ajay Devgn and Akshay Kumar.

You know that Ajay Devgn is a deeply intense, private and silent man, but he’ll say one word and it’ll be impactful. Akshay is a lot of fun. He comes alive with the guest next to him. We’ve had Akshay with Tina, his wife. It was a riot. We’ve had him with Ranveer Singh, it was a riot. And trust me, his episode with Samantha is another riot”.

Karan Johar also shared how the Hindi film industry was vilified. “We as an industry were vilified. We were put in the dungeon for two years. Even I went through a lot and it was not an easy time. And at that point of time, it was like the snake emojis used to come out every time Koffee with Karan was mentioned. And at one point I also thought that I am never going to come back with the show because there was a lot of attack.”