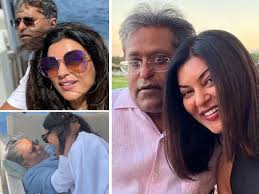 Lalit Modi took to his Twitter and Instagram handles to make the official announcement. He shared a mushy post along with a series of pictures from their vacation in Maldives and Sardinia. He also shared a few throwback pictures featuring the duo in their younger days.

“Just back in London after a whirling global tour #maldives # sardinia with the families – not to mention my #betterhalf @sushmitasen47 – a new beginning a new life finally.

Lalit Modi is in London since 2010. Sushmita Sen on the other hand was in news last for returning to the screen with the third season of her successful web show, Aarya.

Sen, however, didn’t make any official announcement about her relationship with Lalit Modi till the time this story was published.