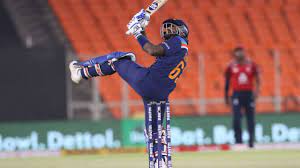 He did well in domestic scene for a long time but it was only after his exploits in the Indian Premer League (IPL) that he came into limelight. Back in 2011, it was the current captain Rohit Sharma who said good things about him, a tweet that went viral soon after Suryakumar smashed his maiden T20 ton vs England in the third T20I. He has great camaraderie with Rohit and on Saturday, on the eve of the third and last ODI vs England, he spoke about it with the media in detail. He said that the skipper has helped him a lot with his batting since his domestic cricket days.

“I’m really happy he has shown a lot of confidence in me. I would like to pay back that confidence by scoring runs and winning the game for the team.”

Asked about his mind set, Suryakumar said he approaches 50-over cricket the same way as he goes about batting in T20s.

Playing the natural game is important and there is an advantage in one days that five fielders are inside the circle so the intent is always to score runs. Even if the wickets are falling I try to keep the scoreboard ticking,” he added.