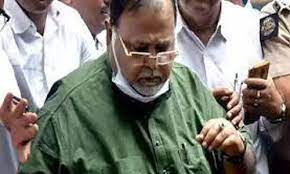 Partha Chatterjee was taken to Bhubaneswar AIIMS in an air ambulance from Kolkata on Monday morning (July 25, 2022) following allegations that the state ruling party may have political influence over doctors at SSKM. Partha Chatterjee faced fierce protests when he entered Bhubaneswar AIIMS despite being covered in tight security. The security guards at AIIMS repeatedly appealed to maintain peace.

State Minister Partha Chatterjee was admitted there since Saturday. But leaders like Madan Mitra or Anubrata Mandal often joined SSKM to evade the Central Investigating Agency, it has been alleged time and again. Along with the opposition, there was a complaint by the ED also.

There was no such trouble in reaching AIIMS from SSKM to Kolkata Airport or from Bhubaneswar Airport.

Most of them are residents of West Medinipur. They said, “After destroying Bengal, now you came here for treatment.” Some protestors also questioned why Partha Chatterjee was taken there by spending money from SSKM. They also alleged that they are responsible for the plight of the educated unemployed in the state. But seeing the tension rising in AIIMS, the security guards there appealed to maintain peace.

According to Bhubaneswar AIIMS sources, a team of four specialist doctors has been formed to treat Partha Chatterjee.