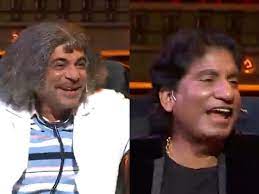 India’s Laughter Champion provides a platform for India’s comedians to showcase their talent. The show marks the comeback of Shekhar Suman on the small screen after a long duration and he is joined by Archana Puran Singh on the judges’ panel. Interestingly, the duo had earlier shared the stage for popular shows Comedy Circus and The Great Indian Laughter Challenge.

Dr. Mashoor Gulati. He will be seen making a comeback to the screens after a long time and entertaining his fans with his hilarious jokes. Sunil Grover is known to tickle the funny bones of his fans. In the promo, the viewers will get to see Dr. Mashoor Gulati teasing judge Archana.

Sunil Grover earned enormous fame after playing the character of Gutthi on the show, ‘Comedy Nights With Kapil’ followed by Dr. Mashoor Gulati and Rinku Bhabhi on ‘The Kapil Sharma Show.’ However, after his mid-air brawl with Kapil Sharma, he quit the show and never returned.