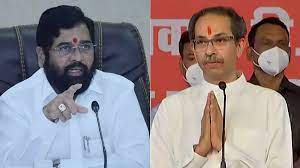 Shiv Sena president and former chief minister Uddhav Thackeray in a marathon maiden interview given to the Saamana executive editor and party MP Sanjay Raut after the collapse of the Maha Vikas Aghadi government after the Shinde-led rebellion disclosed that NCP chief Sharad Pawar did not ditch him but his own people (party legislators) betrayed and deserted him.

Thackeray lashed out at CM Eknath Shinde-DCM Devendra Fadnavis government and took a jibe at them using a famous Bollywood song ‘’Hum tum ek kamre mein band ho aur chavi kho jaye.’’ This was with reference to the duo (CM & DCM) running the government without cabinet expansion despite they were sworn in on June 30.

He claimed that rebels want to separate Shiv Sena and Thackeray with an eye on the post of Shiv Sena chief.

Thackeray reiterated that Shiv Sena’s Hindutva is real terming BJP’s fake one. ‘’BJP is sitting in Bihar with Nitish Kumar. Is he (Nitish) a Hindutvawadi?’’ he asked.

I had no sign in my heart to leave the post of Chief Minister. I did not stick to the chair. I had promised that I would make Shiv Sainik the Chief Minister. I have fulfilled that promise but I will not sit quiet but will strive for further strengthening the party organisation.

However, Shinde camp spokesperson Deepak Kesarkar claimed that they had repeatedly told Thackeray to break alliance with NCP and Congress and questioned why now he was blaming them for plotting a conspiracy.