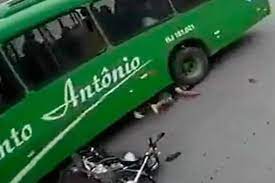 Fines and punishments for violating traffic laws have risen dramatically in recent years. Still, the general population hasn’t taken it seriously, and India has the terrible distinction of having an alarmingly high number of road fatalities.

A helmet is not just an accessory but a safety measure when riding a two-wheeler, and this goes out to people who frequently take this life-saving equipment for granted. A video of an accident involving a biker whose head was saved by the helmet after it wound up beneath the back wheels of a bus has gone viral.

In what can only be regarded as a miracle, a guy in Brazil was hit by a speeding bus and yet escaped with only bruises. The bus and the rider, who was wearing a helmet, are seen approaching one another in the CCTV footage. The guy slides before even making contact with the bus, forcing him to fly off the bike and tumble beneath the vehicle.

After that, the man is pulled out of the life-saving helmet and taken to the side of the road. A few others also commented on how crucial helmets are for bike riders and how this accident should serve as a lesson to those who ride two-wheelers without them.