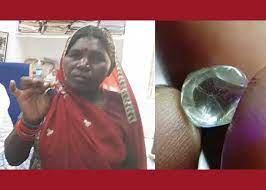 Sometimes, luck comes forward when you expect it the least and so happened in Madhya Pradesh’s Panna, famous for its diamond mines, when a poor tribal woman found a precious stone.

Gendabai, a resident of Purusottampur village of the district, who had gone to collect firewood in a forest area in Panna, returned with a 4.39 carat diamond.

She used to go to the forest to collect firewood, which she sold to earn her sustenance.

On Wednesday, when she was busy in collecting firewood, she noticed a sparkling stone lying just few metres away from her.

The raw diamond, which the woman found, has been received from her and would be auctioned and the money would be given to her after the deduction of government royalty and taxes. The diamond is estimated to be worth Rs 20-25 lakh,” said Anupam Singh, a diamond inspector.

In February this year, a brick kiln operator had found a 26.11 carat diamond worth Rs 1.2 crore. In December last year, the fortune of four labourers changed after they came across as many as seven precious diamonds when they were doing digging work.