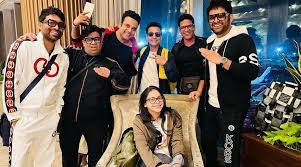 Television show The Kapil Sharma Show (TKSS) is making a comeback with another season. Hosted by comedian, actor Kapil Sharma, it is a comedy and talk show which airs on Sony Entertainment Television.

Kapil’s team took to social media and made the announcement while also revealing that this time we may get to see some new faces. They wrote, “The most popular show of Indian television is coming up with another season of The Kapil Sharma Show and adding new members to the family!”

While fans were quick enough to flood the comment section with excitement, some of them were convinced as well as hoping that Sunil Grover aka Dr. Mashoor Gulati would make a comeback to the show. One of the fans wrote, “we miss sunil grover in kapil sharma show.” Another fan wrote, “If Dr gulati is back in tkss than the level of it goes another level.

Although Sunil has not confirmed about him returning to TKSS, he was seen making a comeback as Dr Mashoor Gulati in India’s Laughter Champion. Talking to Hindustan Times, he said,  “I wanted to do it for myself. I enjoyed dressing up as Doctor Mashoor Gulati after a long time. It was only for one episode. That’s all, and I love it.”

Grover left the Kapil’s show in 2017 after a fight with the comedian on an airplane. Although they are now on good terms and are seen greeting each other cordially, Sunil never came back to the show. As for Kapil, the actor was on a comedy tour titled Kapil Sharma Live. The actor has covered Vancouver and Toronto and his next stop is in Australia.