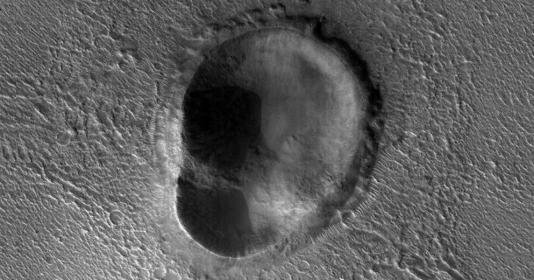 NASA’s Mars Reconnaissance Orbiter has shared an image of a crater on the red planet that awfully looks like a human ear. The crew that spotted the strange crater shape say that the only reason we see it like an ear is due to the phenomenon of pareidolia that makes humans imaginatively see shapes reminiscent of them — just like how we end up seeing animals or bird shapes in the clouds.

The image was captured by the MRO in late 2020.

The orbiter has been going around Mars since 2006 and is actually designed to study the geology and climate of the red planet while offering reconnaissance of future landing sites and sending data from surface missions back to our planet.

Mars has had its fair share of strange discoveries. A few months ago, another image captured by ESA/Roscosmos ExoMars Trace Gas Orbiter’s CaSSIS instrument resembled that of a cut tree stump in rather stunning detail.

The crater lay in the Acidalia Planitia and from the looks of it had frozen material around it throughout the year, with the material containing water ice.