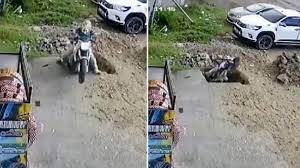 As the chances of getting in danger by falling into deep pits increase in such places. But who knew that even while riding in the city or around proper roads, one needs to be careful about holes in the earth? Describing the aforementioned scenario, a video of a man reversing his motorcycle and falling straight into a ditch has gone viral on the internet. Even though the video is terrifying for multiple reasons, it has managed to tickle the internet and is getting hoards of reactions from the netizens.

The now-viral video was tweeted out by the Why Men Live Less page. A man riding a motorcycle can be seen in the brief video. He was reversing his vehicle as he stood in front of a store. He can be seen being engulfed in a huge ditch that had been dug out directly behind him. The video was posted on Twitter with the caption sarcastically saying, “Journey to the center of the Earth,” and has now got more than 1.3 million views.

After being posted online, the video garnered one million views. While some viewers found the video amusing, others worried for the man’s safety and felt sorry for him. One of the concerned users commented on it, saying, “Road Safety Obligation. That is why it is so important to properly secure construction sites.” One other user wrote, “This can be funny only when you know the person is ok. Otherwise, it’s a shame.”