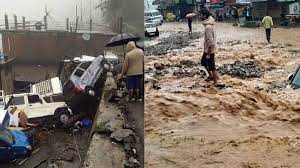 least 19 people, including eight members of a family, were killed and five others went missing in incidents of landslide, flash flood and cloud burst triggered by heavy rainfall in Himachal Pradesh in the past 24 hours, State Disaster Management Department Director Sudesh Kumar Mokhta said on Saturday.
The maximum damage has been reported from Mandi, Kangra and Chamba districts, he said, adding that so far 36 weather-related incidents have been reported from the state. As many as 743 roads, including the Manali-Chandigarh national highway at Mandi and the Shimla-Chandigath highway at Shoghi have been blocked for traffic, news agency PTI quoted official as saying.

Both SDRF and NDRF have started the operation to rescue people who went missing or are buried in debris, said a State Disaster Response Force official.

“During the past 24 hours Mandi, Chamba, Kangra, Kullu, Hamirpur, and Shimla districts have been affected badly. Teams of SDRF and NDRF have been deployed to rescue and evacuate 15 persons who went missing due to heavy rains. Five bodies have also been recovered,” news agency ANI quoted Kumari Ilma Afroz, SP SDRF, as saying.

Twenty-two people, who were stranded following a flash flood in the state’s Hamirpur district, were evacuated safely, they said. A railway bridge on Chakki river in Kangra was also damaged due to a flash flood and collapsed on Saturday. The water in the river is yet to recede.

Chief Minister Jai Ram Thakur offered his sympathies for the fatalities and said that the administration was conducting rescue efforts in the affected districts on a war footing. According to authorities, a landslide brought on by rainfall in the Chamba district claimed the lives of three persons after their home fell.