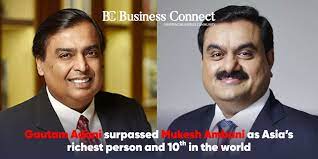 The overall market capitalization of Adani Group’s seven listed companies is Rs 19.73 trillion, whereas Ambani-owned companies have an MCap of Rs 17.82 trillion. With a market valuation of Rs 22.05 trillion, Tata Group is India’s most valuable listed conglomerate.

Despite the increased debt, investors continued to buy Adani Group firms once they developed and diversified into several businesses, resulting in future profits visibility. The Adani Group’s gross debt increased by 41% to Rs 2.2 trillion as of March 31, 2022, from Rs 1.55 trillion the previous year.

According to analysts, some of the current businesses’ fundamentals have improved, while others have made announcements about joining new sectors.

Stocks of Ambani’s Reliance Group are also trading higher, with most experts predicting more gains. According to the company’s most recent annual report, the FY22 fiscal year saw record profitability and margins for RIL’s consolidated activities, with expanding scale in consumer industries complemented by recovery in oil to chemicals. Consumer operations (retail + digital) now account for 15/10% of consolidated revenues/EBIT, up from 15% in 2010.