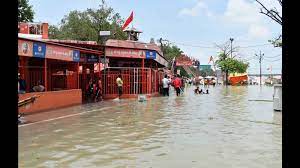 After their homes were inundated, people were forced to live on the streets of Delhi. Following heavy rain in the upper catchment areas, the river breached the danger mark of 205.33 meters on August 17, leading authorities to evacuate almost 7,000 people from low-lying areas.

The monsoon rains have disrupted normal living across the country.
As monsoon fury grabbed numerous regions of India, a cloudburst hit the Raipur-Kumalda area in Uttarakhand’s Dehradun, forcing rivers to exceed their banks and landslides to wreak havoc in Himachal Pradesh. At least 31 people were killed in flash floods, landslides, and excessive rain in Himachal Pradesh alone on Saturday.