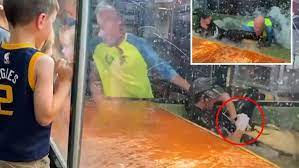 An alligator dragged a zookeeper into a tank of water in front of scared children before being rescued by a brave visitor.

A horrifying video captured the moment the employee at Utah’s Scales and Tails reptile centre was captured by the beast. As Donnie Wiseman pinned the beast down, Todd Christopher grabbed the woman by the shoulders and pulled her from the water.
The staff worker was explaining the alligator to parents and children when it lunged and chomped her hand, dragging her into the water.

During the event in August, Donnie Wiseman, 48, fearlessly plunged himself into the water and leaped on top of the lizard.

Donnie managed to subdue the beast, giving the keeper a chance to calmly tell him and another guy, Todd Christopher, what they needed to do to help her escape the pool.

Children as young as six were in tears as they witnessed the awful attack.

The handler required surgery and was being treated with antibiotics.

Shane Richens, the company’s owner, stated in an interview that the handler was opening the enclosure to feed the alligator as usual.