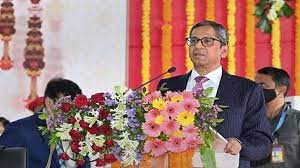 NV Ramana, the Chief Justice of India (CJI), will step down on Friday, August 26. “I hope I have lived up to your expectations of me,” he remarked on Thursday. He further stated that during his term, the Supreme Court Collegium successfully selected approximately 224 judges to various high courts and cleared almost all of the names relevant to the Delhi High Court, and he hoped that these recommendations will be approved by the Centre shortly.

CJI N V Ramana, who will step down as Chief Justice of the Supreme Court on August 26, said he raised issues concerning the nomination of judges and infrastructure throughout his tenure and hoped he lived up to the legal community’s expectations. “I hope I lived up to your expectations of me.” I carried out my duties as Chief Justice in every way possible.

Two problems were raised: CJI
The retiring CJI made the remarks while speaking at a goodbye ceremony hosted by the Delhi High Court Bar Association. “You are all aware that I have mentioned two issues: infrastructure and the nomination of judges. Thanks With the help of my colleagues on the Supreme Court and the collegium, we were able to nominate around 224 justices to the high courts.”