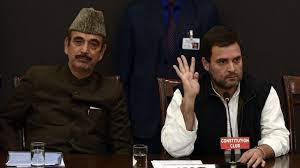 Ghulam Nabi Azad named a security guard in his resignation letter. Why did Ghulam Nabi Azad interrogate this man? Ghulam Nabi Azad also called the leaders of Rahul’s entourage into question. Azad claimed that all of this occurred because the party’s leadership attempted to impose a non-serious candidate on the party for the last eight years.

Ghulam Nabi Azad has referred to the security guard in his resignation letter, possibly KB Byju, the Hindustan Times reported. According to the report, Byju was earlier part of the Special Protection Group that joined Rahul Gandhi’s team after he became general secretary. Byju does not hold any formal position in the Congress but his stature in the party continued to grow. Byju handles important tasks besides Rahul Gandhi’s security.

In his resignation letter, Azad also mentioned Rahul Gandhi’s inner circle. It is aimed indirectly towards KC Venugopal. Rahul Gandhi holds a particular place in his heart for KC Venugopal. Venugopal’s position was raised to general secretary in 2017. Rahul Gandhi became Congress President the same year. Venugopal was perceived as being difficult to approach. Many senior figures, including Azad, were enraged as a result.