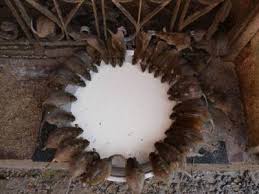 Karni Mata was a Charan caste warrior sage. He was worshipped by the locals despite leading an ascetic life. He also lay the foundation stone for the Mehrangarh and Bikaner forts after receiving pleas from the Maharajas of Jodhpur and Bikaner. Although there are many temples devoted to him, this temple in Deshnok city, 30 kilometres from Bikaner, is the most well-known.

Maharaja Ganga Singh of Bikaner constructed the Karni Mata Temple in the early twentieth century. The temple’s whole construction is built of marble, and its architecture is in the Mughal style. The idol of Karni Mata of Bikaner is seated inside the temple’s sanctum sanctorum, holding a trident in one hand. Along with the goddess’s idol, the idols of her sisters can be found on both sides.

Rather, this temple is home to around 25,000 rats, which are frequently seen roaming around. Normally, the false object of rats is thrown away rather than eaten, but here the devotees are given false offerings of rats. This is the temple’s sacred practice. This is why people come from all across India and overseas to experience this breathtaking scenery.