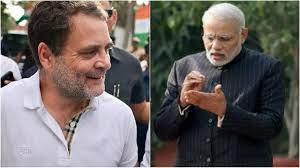 Padma-Twitter Shibir’s account uploaded a photo of the former Congress president wearing the T-shirt with the caption ‘Bharat Dekho Yatra.’ The Congress side responded quickly as well. Modi has been reminded of the Tk 10 lakh suit and the Tk 1.5 lakh sunglasses by Sonia Gandhi’s team.
According to the BJP, Rahul’s white t-shirt, which he wore on the Bharat Joro Yatra, was printed by a world-renowned garment firm. Despite its simplicity, the price is 41 thousand 215 taka. Rahul, 52, began the ‘Bharat Joro Yatra’ from Kanyakumari on Wednesday after visiting father Rajeev’s memorial in Tamil Nadu. Kanyakumari to Kashmir is 3,750 kilometres away. It will last for another five months.

Since then, the BJP has relentlessly targeted Rahul. Occasionally he is advised to travel to Pakistan, and sometimes it is claimed that Rahul’s secret goal is to partition India. This time, the Narendra Modi-Amit Shah team ridiculed his clothing as well. In response, the Congress Twitter handle tweeted to BJP officials, ‘Bharat joro yatra terrified by the crowd? Discuss the issues. Discuss unemployment and inflation. If you want to talk about clothes, Modiji’s suit costs 10 lakh rupees, and his glasses cost 1.5 lakh rupees. Tell me what I should do.

In fact, on Republic Day in 2015, then-US President Barack Obama visited India as the principal guest. During the meeting with Obama, Prime Minister Narendra Modi allegedly donned a suit worth Rs 10 lakh with his name inscribed on it. There was a discussion over it at the time. When the suit was auctioned off, it was purchased for 4 crore 31 lakh rupees by Laljibhai Patel, a Surat diamond merchant and chairman of ‘Dharmanandan Diamonds Private Limited.’