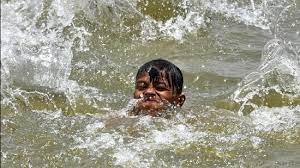 Nothing can deter someone who is determined to do something. A dedicated individual overcomes all barriers and achieves their goal. Nothing can stop them: the sun, the storm, the sea, and the rain. Such instances have occurred in Andhra Pradesh. The river has overflowed. Tada Kalavati, on the other hand, did not stop. After crossing the river, the young woman headed to take the exam. His two brothers have also stepped forward to assist him. He works for a private company in Visakhapatnam. He got back home two days ago. Meanwhile, a test day has been scheduled in the interim. Vizag Examination Center The exam was set for Saturday. However, the Champavati River had swollen due to two straight days of rain.